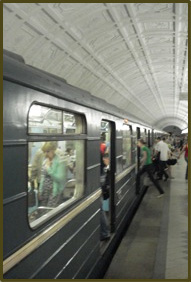 Named one of 2013's Top Ten Books on Urban Planning, Design, and Development
Planetizen.com, December 10, 2012.
In the 20th century, our greatest cities were almost ruined by the automobile. Only a global revolution in transportation can bring them back from the brink.

The automobile has encouraged obesity and social isolation, destroyed public space, encouraged fossil-fuel driven foreign wars, and undone the fabric of once great cities. Those are some pretty heavy accusations, but Taras Grescoe makes the charges stick with a compelling mix of reportage, cutting humor, and historic research.

But Straphanger isn't just another screed against the car. In this timely and persuasive book, Grescoe joins the ranks of the world's straphangers-the growing number of people who rely on public transportation to go about the business of their daily lives. In North America, the perception of transit is often unflattering-it is too often seen as a squalid last resort for those with one too many drunk-driving charges, too poor to afford insurance, or too decrepit to get behind the wheel of a car. Indeed, a century of auto-oriented culture and bad city planning has left most of North America with transit that is underfunded, ill maintained, and ill conceived. But as the demand for oil fast outpaces the world's supply, a revolution in transportation is under way.

On a journey that takes him to New York, Moscow, Paris, Copenhagen, Tokyo, Bogotá, Phoenix, Portland, Vancouver, and Philadelphia, Grescoe gets the inside story on the world's great transit systems, going beneath the streets to see subway tunnels being dug, boarding state-of-the-art streetcars, and hopping on high-speed trains, along the way uncovering new ideas that will help undo the damage a century of car-centric planning has done to our cities. Ultimately he envisions a future with convenient, affordable, and sustainable urban transportation-and better city living-for all.

"All the cities we admire most in the world-the places young people want to live-boast great public transit systems or are in the process of building them. Taras Grescoe explains why: there's nothing more civilized than a great subway, or a bus rapid transit system, or a squad of ferries, or any of the other ways we've learned to move ourselves around urban space. As this splendid account makes clear, a car isn't liberation: not needing a car is liberation!"
-Bill McKibben, author of Eaarth: Making a Life on a Tough New Planet

"I was browsing through Straphanger when I came upon a chapter on Tokyo, a city I know pretty well. I soon discovered that Taras Grescoe knows far more than I about the design and infrastructure of that immense megalopolis-and he explains it all in a clear and engaging way. He does the same for a dozen cities around the world, and proves convincingly that cities work best when they treat the private car as an unneeded intruder."
-T.R. Reid, author of The United States of Europe

"Grescoe's ability to mix first-hand transit experience in more than a dozen cities with the politics of city and transit planning makes for compelling reading. It makes you want to travel the world to ride a few more buses and subways."
-John Sewell, former Mayor of Toronto, author of The Shape of the City.

"Cities around the world are struggling with public transit, the key foundation of modern city building. In this wonderful book, Taras Grescoe looks at what is happening in major cities across the globe, and across time. Anybody charged with making transit decisions in any city, and citizens trying to make sense of the political conversation about mobility- from walking and cycling to light rail and subways, and how to pay for them-should read Straphanger."
-Alan Broadbent, author of Urban Nation: Why We Need to Give Power Back to the Cities to Make Canada Strong

"A strong and timely argument for moving metropolitan motorists away from their cars."
-Publishers Weekly